The role of CT and MR in stroke patients

This blog post first appeared on the Quantib blog on March 14, 2018. Click here for the original. Stroke is one of the most common causes of death in the w

Stroke is one of the most common causes of death in the western world causing more than 6 million deaths per year.1 Annually, almost 17 million people suffer from a stroke for the first time; this is analogous to one person having a stroke every two seconds.2 Ischemic stroke accounts for 80% of acute stroke cases, the remaining 20% concerns acute hemorrhage. Most primary hemorrhagic strokes are caused by hypertension, but sometimes they are caused by underlying structural lesions (e.g. aneurysm, metastases or AVM).3 Furthermore, it is important to realize ischemic strokes can be followed by secondary hemorrhagic complications leading to disability or death.4

Next to differentiating between ischemic and hemorrhagic stroke, it is of importance to exclude stroke mimics such as encephalitis, acute demyelination, meningitis, abscess, subdural hematoma and space occupying lesions.4 Current data does not provide a clear answer to the question whether administration of tPA can harm patients which are eventually diagnosed with stroke mimic causes, therefore, caution is required to avoid unnecessary therapy. That said, it is of the utmost importance to exclude hemorrhagic stroke before starting tPA therapy.8

Identifying the difference between the infarct core (dead tissue) and the penumbra (tissue at risk, but not yet infarcted) is also of great importance as the latter could still recover, but will also be more likely to create secondary hemorrhagic complications upon restoration of blood flow, especially if tPA is used.3,4

Summarizing the different treatment options described above, we can suggest several goals for the imaging of stroke patients. Firstly, hemorrhage strokes need to be identified to exclude these patients from tPA treatment, thereafter further examinations need to be performed to evaluate specific causes. Secondly, stroke mimics need to be diagnosed in order to avoid unnecessary therapy. Thirdly, if the patient is not suffering from hemorrhagic stroke or stroke mimics, the location of stenosis and occlusion needs to be determined. And lastly, the location and the extent of infarct core and penumbra needs to be estimated.4,9

Different imaging methods are available to assess patients presenting with stroke symptoms. The remainder of this blog post will discuss and compare the standard choice of non-contrast CT (NCCT), to the more advanced modalities of CT angiography (CTA) and CT perfusion. Also, several MR techniques including MR angiography and MR perfusion will be assessed, concluding with catheter angiography.

Currently, non-contrast CT is the primary choice for initial evaluation of patients suspected of stroke. CT is widely available, a scan can be made within a minute and unstable patients are easier to manage in a CT scanner than in an MR scanner. Thereby, most of the time an NCCT provides enough information to differentiate between ischemic and hemorrhagic stroke, that is, if imaging takes place within a few hours after stroke onset. Within that time there exists tangible indications of early ischemia e.g. loss of differentiation between gray and white matter and subtle signs of swelling.4,10

NCCT can occasionally provide information on the presence and localization of an arterial thrombus, with the dense artery sign: an artery containing a thrombus has a higher attenuation and thus appears more dense than adjacent or equivalent contralateral arteries, meaning the location of the occlusion can sometimes be found on NCCT.4,11 This holds for larger infarct zones; infarcts with smaller volumes typically pose a greater challenge for detection.4Furthermore, if there are no (early) signs of ischemic stroke, NCCT is not suitable to separate stroke patients from patients suffering from stroke mimics (for example a seizure), hence, diagnosing stroke mimics exhaustively requires for example CT perfusion in addition to the more standard NCCT.12 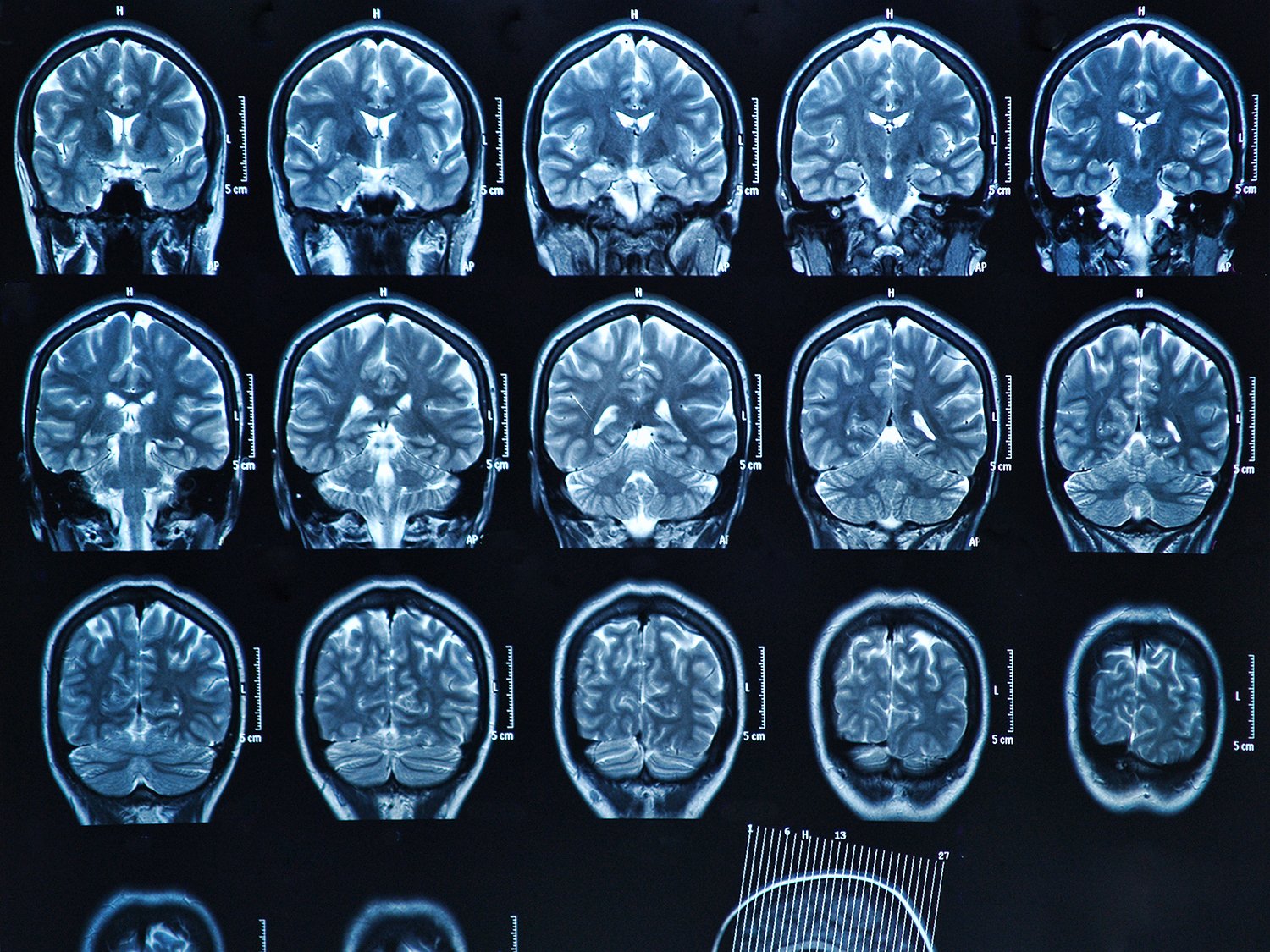 After having excluded hemorrhagic stroke based on NCCT, CTA can be performed in the case of acute stroke with the purpose of detecting or determining the location of thrombus or occlusion. Large intracranial vessels, such as the internal carotid artery and middle cerebral artery trunk can be excellently assessed using CTA to detect occlusion. Additionally, it is possible to measure the vessel diameter and grade intracranial stenosis based on CTA results in order to plan neurovascular interventions.13,14 As the method focuses solely on depicting the larger blood vessels, it is ideally suited to evaluate the anatomy, however, it is not fit to differentiate between the core and penumbra.15 In case of a hemorrhagic stroke, CTA can be performed to further refine the diagnosis by excluding or detecting arterial aneurysms (subarachnoid bleed) or other vascular anomalies. In treatment tracking CTA is used for evaluation and planning of both coiling and surgical strategies.16,17

CTA does require the use of an intravenous contrast agent, making it mildly invasive.18 For this reason NCCT is preferred for differentiating between ischemic and hemorrhagic stroke. Also, in its standard settings CTA will provide the complete timeframe the bolus requires to pass through, captured in one series of images, instead of showing development over time in multiple series of images, as angiography with multiple registrations produces. A possible solution is to obtain a 4D CTA, i.e. obtaining multiple CTA images during the passing of the bolus. However, as the total imaging time cannot exceed the time it takes for the bolus to pass, the time available for each CTA image will decrease causing the image quality to decrease significantly, or less CTA images can be acquired.3,4 The complete examination procedure can take around 15 minutes, but the CTA examination itself usually only takes several minutes, making it a good candidate to perform after NCCT to determine stroke location since the patient does not have to be moved from the CT-examination table.19

In order to differentiate ischemic stroke from hemorrhage and facilitate the diagnoses of stroke mimics and other possible findings such as leukoaraiosis, multiple MR sequences need to be applied which, with modern techniques, requires ~6 minutes.20 However, imaging times on the order of ~20 minutes, depending on contrast administration, are more common.4 Additionally, MR generally provides a higher sensitivity and specificity in the diagnosis of acute ischemic infarction in the first few hours after onset, but is not typically available for emergency diagnosis.4,21

Differentiation between acute ischemic stroke and hemorrhage can be done based on T2* weighted images. Additionally, a T2* sequence offers the option of detecting intraluminal thrombus and microbleeds.4 FLAIR and T2-weighted images show a hyperintense lesion in the case of an ischemic infarction. Usually these sequences are able to show the lesion if imaging takes place within 3 to 8 hours subsequent to stroke onset.22 If required, Diffusion Weighted Imaging (DWI) offers the option of detecting parenchymal ischemia and/or infarct within minutes after stroke onset. Within 6 hours after onset this sequence is shown to be more sensitive in its detection than NCCT.4However, in this stage it is not necessarily the case that the full lesion area, as shown on the DWI, depicts irreversibly damaged tissue.22 As cytotoxic edema has not had a lot of time to set in yet, it is possible that a large part of the DWI lesion is still viable. Lastly, the mismatch between DWI and FLAIR can give an estimation of the time of stroke onset. Lesions which are visible on a DWI image, but not apparent on the FLAIR scan indicate stroke onset was less than 4,5 hours ago. This can help in deciding whether the patient is a suitable candidate for IV thrombolysis.4,23

Like CTA, the standard MRA sequence will only provide snapshot information, excluding insights on development over time. Optionally a 4D MRA sequence can be performed, however, as with CTA, it should be taken into account that this procedure significantly decreases image quality.4

Examining the intracranial vessels is preferably done using 3D Time-of-Flight (ToF) MRA, as it requires no intravenous Gadolinium contrast and is, therefore, non-invasive.24 However, it does increase the total scan time by 5-10 minutes.26,27. Also ToF-MRA is relatively sensitive to artefacts, making contrast enhanced MRA a more reliable method for detecting occlusions.4

CT perfusion (CTP) is ideally suited for differentiating between the penumbra and the infarct core.28 The penumbra is defined by ischemic tissue potentially destined for infarction, however it is not irreversibly injured, and would be the target of any acute therapies.29 Usually this technique is applied in addition to NCCT, as this scan can provide the initial differentiating information between ischemic and hemorrhagic stroke where CTP can provide additional information on the extend of the infarct.30

Key to CT perfusion is the interpretation of several perfusion parameters, among which cerebral blood flow (CBF) and cerebral blood volume (CBV) are of paramount importance. In general, it holds that a decreased CBF value combined with a stable or increased CBV, depicts reversible ischemia, where significant decrease of both CBF and CBV signify irreversible infarction.31,32

The difficulty with detecting the penumbra and the infarct core on CT perfusion, as well as on MR perfusion, is the standardization. To date no common threshold values have been determined. Additionally, the differences in perfusion and processing calculations can generate diverging results, further complicating the standardization of CT/MR perfusion image interpretation.4 To realize the full potential of CTP, a standardized CTP interpretation must be reached.

It should be taken into account that adding a perfusion scan to a CT protocol generally adds 10 to 15 minutes to the scanning time, which includes processing.33 In case of an MR examination, the MR perfusion sequence adds around 5 minutes to the total scan time and 5 minutes preparation and post-processing time (depending on specific MR parameters of course).3,34

Catheter angiography provides great information on the vascular anatomy and, in the case of ischemic stroke, on the location and extent of the thrombus and/or embolus.4 Also, when a CTA/(contrast enhanced) MRA reveals no deviations, but there exists a strong suspicion of vascular abnormality, catheter angiography might be used as an additional diagnostic modality.35 However, this is an invasive, intra-arterial procedure using a contrast agent to enhance vessels, therefore it carries an inherent risk factor. Additionally, administration of intravenous thrombolysis will most likely require less time than performing neuroangiography, which is not available in all hospitals, resulting in a tendency to prefer intravenous thrombolysis if there is no need to further investigate possible vascular abnormalities.4

NCCT is still the fastest and most widely accessible method for stroke diagnosis. Including CTA and CT perfusion in the CT imaging protocol in case of non-hemorrhagic stroke provides an increased amount of information on the location of the occlusion and the extent of the infarct core and penumbra. Compared with CT, MR generally provides a higher sensitivity and specificity in the diagnosis of acute ischemic infarction in the immediate hours subsequent to onset. An MR protocol, including MRA and MR perfusion sequences, facilitates retrieval of the same information as an extended CT examination, however, the standard MR protocol for differentiating between ischemic and hemorrhagic stroke takes significantly more time than solely an NCCT. On the other hand, an advantage of MR is the absence of ionizing radiation, but what is the importance of this in (quality of) life threatening situations?

Early Signs of Brain Ischemia on CT and MR; Can AI Lend a Helping Hand?

A poor functional outcome of stroke patients may be predicted by early signs on CT and MRI. Radiology exams carried out within 6 hours after stroke...

Our CSO Dr. Vesna Prchkovska was invited to talk about our startup and the tech life on CODE_n blog as a female pioneer. Please find her interview...