Top 5 Trends in Neuroscience You Need to Know in 2023

Neurotech is evolving faster than ever, and staying on top of trends is a must for researchers. Discovering the major neuroscience trends for 2023. 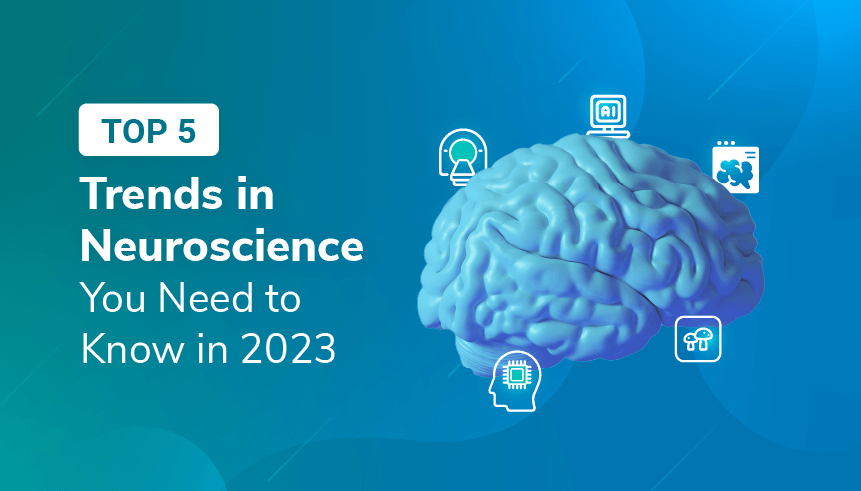 Advances in neuro-technology keep advancing at an astounding pace, and at times it seems like we are closer to science fiction than reality. Let’s peer into the crystal ball and look ahead at the neuroscience trends to look for in 2023!

Psychedelic drugs have come into the spotlight in the use for a variety of psychological disorders. Often in conjunction with traditional “talk” therapies, psychedelics have been shown to help treat neurological and mental health disorders by changing the way parts of the brain communicate with one another. The hope is that two main psychedelic substances, psilocybin and MDMA, will soon be approved by regulatory authorities and more widely accessible. Research into psilocybin, the psychoactive compound found in naturally occurring psilocybin mushrooms, has shown a correlation between controlled psilocybin use and the lessening of Post-traumatic stress disorder (PTSD), depression, anxiety, and more. Separately, MDMA is being investigated as a drug to treat PTSD, eating disorders, as well as anxiety disorders as it has been known to, in small doses, help patients better connect with therapists especially when opening up about trauma. Atai Life Sciences have launched a phase 1 clinical trial on an MDMA derivative. And in London the first MDMA-supported psychotherapy clinic has opened.

"The research in this field is only in its infancy, however, the approval of psychedelics for neurotherapies opens a whole new door to treatments for those afflicted by neurological and mental health disorders."

Brain implants enable communication between one’s brain and an electronic device. These implants aim to improve brain disorders by directly modulating brain activity. Implants like the ones being created by tech companies such as Braingate or Neuralink are what we call BCI’s or Brain Computer Interfaces. BCIs are able to acquire brain signals, analyze them, and then translate them into commands, allowing humans to control their environment through their thoughts. The main goal of BCI brain implants is to restore function to those affected by neurological disorders such as Parkinson’s Disease, stroke, spinal cord injury, and more. BCI technology has the potential to help individuals with severe disabilities regain the ability to communicate and control assistive devices for walking and manipulating objects. A small number of people with disabilities are already using BCIs for basic communication and control in their daily lives. With improvements in signal-acquisition hardware, clear clinical validation, viable dissemination models, and increased reliability, BCIs may become a widely used communication and control technology for people with disabilities and potentially for other applications as well.

3. The Future of MRI Machines

MRI machines, like computers, are constantly developing. But in this case actually into two different directions. On the one hand, bigger and better and on the other, smaller and more portable.

Since the first roll-out of a 7 Tesla Siemens MRI scanner, we see them more and more widely used in research, but also in clinical routine. However, this also means a lot of data is produced! Big amounts of data require more disk space to be stored, more memory to analyze, take longer time to be sent from one place to another, and also need to be supported by enough computing power. The resolutions they provide are giving unprecedented looks into our bodies and can provide answers to questions we couldn’t answer before.

On the other hand, as more and more MRI scans are requested for daily clinical care, companies have also looked into providing smaller, more portable and cheaper MRI machines. Companies such as Hyperfine or PhysioMRI have not only managed to make their systems portable, but by reducing the magnetic field, they are cheaper to produce and provide more comfort for the patient.

A new positron emission tomography (PET) radiotracer, named 18F-MK6240, has been shown to effectively measure increases in brain tau protein in Alzheimer’s disease, prior to any observed symptoms. There is an unmet need for sensitive biomarkers that quantify early pathologic changes and correlate closely enough to disease progression and clinical outcomes. This novel PET tracer is desired to help guide the discovery and development of disease-modifying therapeutics in neurodegenerative diseases.

A further novel PET radiotracer, 68-Ga-NOTA-AE105, was able to accurately assess the presence of a biomarker that indicates the level of aggressiveness of neuroendocrine neoplasms (NENs) in patients. It may also serve as a potential target for peptide radionuclide therapy (PRRT). This new technology has the potential to improve care for such patients.

Novel PET radiotracers could boost the future research of any neurodegenerative disease and even research in other body parts.

While the use of Artificial Intelligence (AI) and machine-learning based biomarker tools has exploded over the last decade, we are yet to see these used more widely in the clinical setting. This is mainly due to the lack of digitalization of healthcare systems, clinical processes, but also because a single tool or biomarker is hard to integrate into an existing ecosystem. However, as barriers are broken down and the pressure on healthcare systems is ever greater, AI tools are needed to reduce some of the more mundane workload. Segmentation of tumors in breast or lung MRI scans or marking fat vs muscle tissue in CT scans are done by the thousands every day, but if a clinician can rely on AI to do the first step automatically for them, it allows them to focus more on the patient. It can also increase their diagnostic accuracy. In the next year (and following years) we will see an increased integration of AI tools. The UK for example has established the NHS AI Lab with £250m of funding to accelerate the safe adoption of AI in health and care, trialing more than 40 projects, from cancer to neurodegenerative disease to mental health.

Mint Labs at Neurolaunch’s Demo Day The number of startup accelerators is doubling every year, but few are as specialized as Atlanta’s NeuroLaunch,...

Neuroimaging analysis requires a number of software, including Open-Source and Licensed tools such as: Neurodebian, FreeSurfer, ANTS, MRtrix and many...

Top 5 Trends in Neuroscience You Need to Know in 2022

The neuro tech field has sped up in recent years and staying on top of trends is becoming a must in the neuro research. Choosing the right tech when...